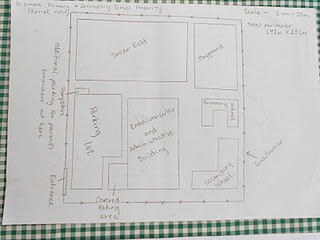 Monday, some pretty cool things happened. Wasn’t mentally/spiritually prepared to run in the morning (yes there are spiritual preparations for running for me, ask me about it when I get home if you want to know more), but I was ready to move. Unfortunately, I spent most of the day with my butt in a chair, either at the guest house or the FVA office, but after a full 9-hour work day (with an hour for lunch, of course–let’s be real), Kelly and I had successfully designed and photocopied the plans for three schools (both primary and secondary) and an administrative/extracurricular building within a single plot of land for the Gisimba Memorial orphanage and Nyamirambo neighborhood, and laid out a solid written project proposal. Sure, probably more than half of the drawings are not completely to scale, and neither of us have any real architectural experience, but 24 hours later we’d had a meeting with our Gisimba correspondent, obtained the OK to hand the plans off to our friend Sandrali (the real architect) and received a promise of information-gathering from the Gisimba people to finish the written proposal, which we are hoping to have finished by this coming Monday. So–to my sister Erin, the architect…I’m doing what you could be doing, halfway around the world. How cool is that?

And now I’ll let that work speak for itself 🙂

But that’s hardly the end of the excitement! As some of you may know, my (possibly our?) good Alaskan friend Natalie has been working at the Kigali International Community School (KICS) as a fifth grade teacher for about six months now, and I hadn’t seen her in probably over a year when she came to meet me at the airport when we first arrived in Kigali. That was a happy time in itself, but today was the best. I’d given her our team cell phone number on day three or something, but we hadn’t really connected other than a few emails. Still, she gave me the name of the headmaster at KICS eventually, and this morning we (Kelly, Anna and I) were able to arrange a day “shadowing” Natalie. Kelly is the only one seriously planning on becoming a teacher, but we all had a reason to go.

Since we had to share a vehicle with the team going to PEFA, we ended up at KICS an hour early, but as it turned out, God had some additional plans for us–pray for the school. The headmaster informed us that they are currently going through an accreditation process with whoever it is in the U.S. that organizes that, as well as constructing a new science building/library which was supposed to be finished this past summer I think. The receptionist (or whatever you want to call her) also just found out that her adult son in the States is still sick with some unknown ailment, and worse. So we prayed. We walked and toured and prayed and it was so good. Then, just before we went in to see Natalie, a guy (parent, maybe?) who had come to talk to the headmaster informed us that he had heard of Gustavus, was from Minnesota and knew a second grade teacher at KICS from Anna’s hometown.

So yeah. Talked to her, went to Natalie’s class, had a blast singing what we call “campy-camp” Christian songs, listening to a Bible lesson, helping kids spell, eating lunch with the kids (which included a detailed description of a LOTR-style book allegedly being written by an art-obsessed ten-year-old named Trevor), reading Cloudy with a Chance of Meatballs and going to a chapel service run by kindergarteners.

Phew. Sorry, that was a long sentence. G’ahead and catch your breath. Okay, go.

Also, it was just fun to hang out with Natalie, and arrange a cribbage date for Sunday. Hoo-rah. Oh and we sat in on the second grade class too, where they had just been talking about MLKJ day, and a little girl named Abby explained to me how the American civil rights activist made a law that allowed her “brown” friend Georgia to play with her white friend Grace. Talk about awesome.

And then, y’know, we basically got hit on by a motorcycle taxi dude who really didn’t speak any English but was able to teach us words for pretty much all of the body parts in Kinyarwanda as we waited an extra hour and fifteen minutes for our real ride. Nbd.

Also, City Hill team got here yesterday, so the guest house is now twice as full, but it’s all good. I’m excited for what’s in store for the rest of this trip 🙂