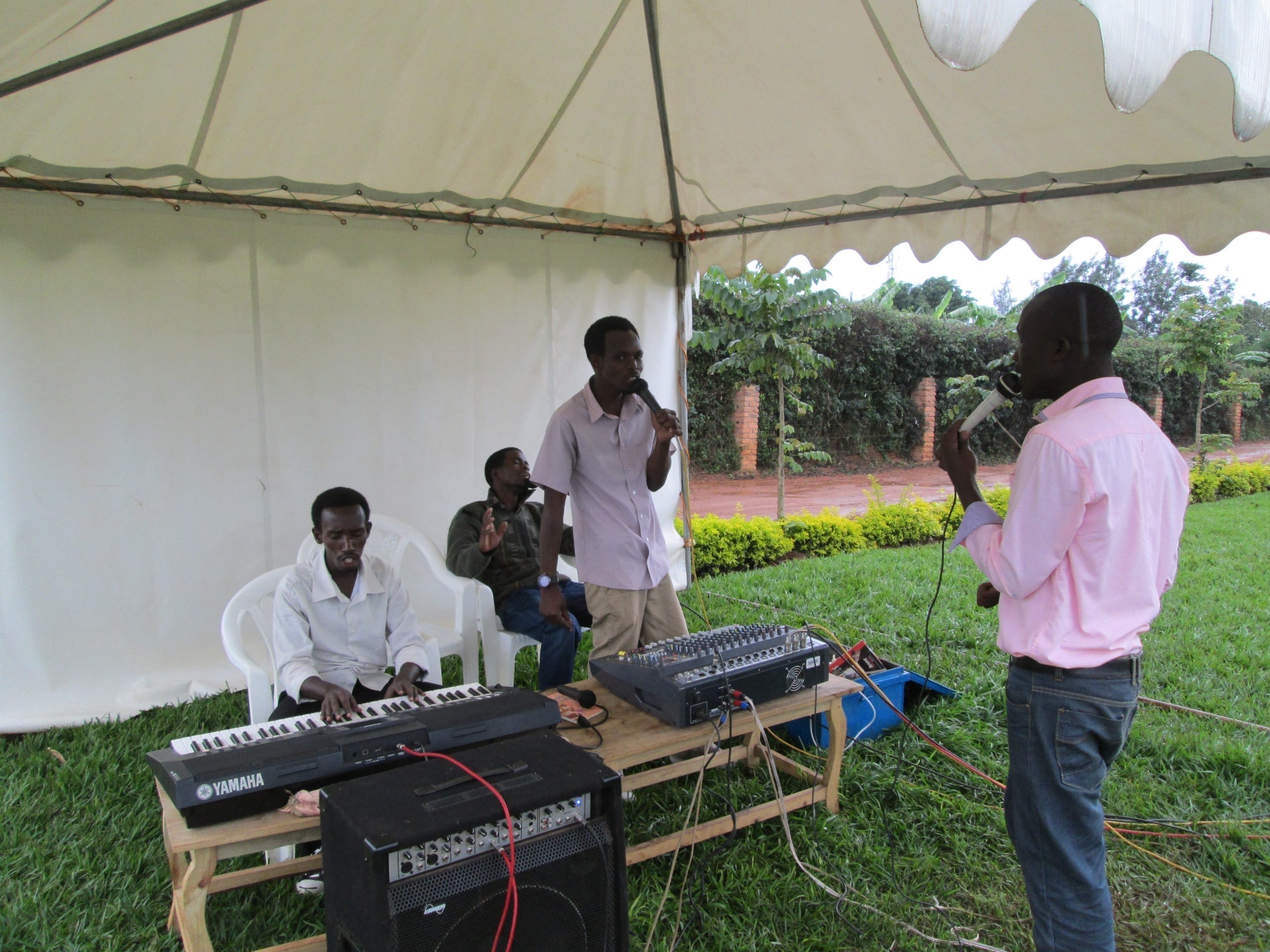 It’s finally safe to say that John and I are acclimated to Rwanda. We’ve enjoyed food and fellowship in abundance and both slept through the night for the first time last night. Of course, that was coming off an exhausting day of planning, setting up for, and hosting an evangelistic outreach meeting. It was a good tired. We worked hard preparing as best we could and left the results to God.

The evangelistic meetings are taking place on the beautiful Faith Village site. The program includes a small choir of young singers, preaching by Sandrali and his brother Gaspar, and a showing of the “Jesus Film” in the Kinyarwanda language. And dancing…lots of dancing! This all sounds very organized and well planned, but that is misleading.

We started the day with a staff meeting in the FVA office. Our role was to prepare all the logistics for the event. We identified what needed to get done and who would be responsible for each. This included creating a schedule for start, transitions, and end time.

Sonia (FVA staff) and I worked together acquiring chairs and meticulously set them up in the tents along with the help of several locals. Then we waited. Then it started to rain…hard! We’re in the middle of the rainy season so it wasn’t unexpected, but it does slow down productivity. After waiting some more the people with the sound system arrived just at the time we were originally scheduled to start. I’m able to operate on “Africa time” but it is still hard when you are responsible to host. The guys proceeded to set up speakers and wiring in the rain. I was concerned that this would damage the equipment, but they didn’t hesitate. It was the sort of equipment that has been used and fixed, and used again many times. Just right for our purposes.

Then I hit the neighborhood to invite people to the event. I strolled up and down the street approaching everyone that I met with a greeting, “Muraho” (hello). “Amakuru” (how are you). “N’meza” (fine). I found that a combination of polite Swahili and direct Kinyarwanda worked best in getting young people to come to the event. “Karibu” (welcome) with a smile. Then “T’jende” (let’s go), or “guino”(come). The older men stayed put, and the young men were skeptical, but children came by the dozens. Many women also came.

By 4:30 the rain had subsided and the singers belted out well known praise songs in Kinyarwanda. It was twilight when Evangelist Sandrali and Pastor Gaspar arrived. Gaspar served as the MC and led people in more singing and dancing. He thanked God for making us human beings (“not a chicken, not a cow…”) and giving us the lives that we have. When Sandrali got the mic the crowd was happy and relaxed. He proceeded to share the gospel and many were visibly moved by what he was saying. It was dark when Sandrali asked people to come forward to pray for salvation. John, Danny, and I joined the Rwandan pastors present in praying for the people who came forward. It was a joyous time! Most people would think this was the end, but we still had the “Jesus Film”.

A Rwandan man from Cru had come and rigged up a screen and projector off to the left during the preaching. The system was functional, but we’re talking old school. Reels of film. Sound that crackles. Perfect for this purpose. The crowd loved it when they heard Mary speaking Kinyarwandan! It was fun to hear the gasps when the serpent appeared to tempt Jesus in the desert and the cheer when the dove descended upon Jesus at his baptism. We watched only the first portion of the film, but will continue showing it on Tuesday night. Following the film the people were given another opportunity to come forward in response to the gospel and for prayer. Many came forward, we prayed for them, and then the singers came up again. We danced and danced and danced!
It was night filled with joy and we are eager to see what God does tonight.